What does the matric pass rate actually tell us about the health of South Africa’s schooling system? 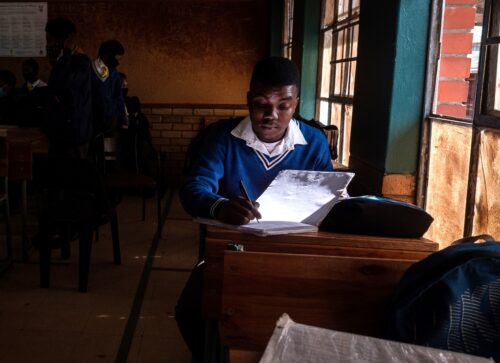 Despite failing grade 3 and 4, Dumo is determined to get his matric. He wants to study Mechanical Engineering at University and this dream keeps him motivated to persevere with his schooling.

The annual matric pass rate is traditionally considered a measure of the health of our schooling system. This statistic is an important indicator for the basic education sector, but it does not tell us about learners’ pathways through school from Grade 1 to matric.

Four out of ten learners drop out. Why?

So, what factors make a learner more likely to drop out? Typically, dropout comes at the end of a long process of disengagement in which a learner is pushed or pulled away from school because of factors at home, at school and in their communities. Rather than being supported to complete their schooling, most learners in under-resourced communities get stuck in cycles of grade repetition, or withdraw from school altogether. Among learners in Grades 10-12, approximately 20% are three or more years over-age, having repeated grades.

Before the pandemic, around 40% of learners who started school in Grade 1 would drop out before completing matric. The Covid-19 pandemic has threatened to make the situation far worse. In November 2021, the Department of Basic Education (DBE) revealed that around 200 000 learners did not return to school during a six-month period. To make matters worse, the long-term impact of disruptions to schooling for today’s primary school children — including learning losses — may lead to dropout when they reach Grades 10, 11 and 12.

To begin turning the situation around, the basic education sector must make the prevention of dropout an explicit goal of our schooling system. To do this, dropout should be a key performance indicator (KPI), serving as an accountability measure for the sector.

Collecting detailed and accurate information about our learners can inform a more attentive and effective education system in which every learner is supported to finish matric. Collecting learner-level data is an effective way to implement prevention strategies, offer support, and ensure that learners are not falling through the cracks. When used in this way, datasets form part of an Early Warning System (EWS) used to anticipate and prevent dropout.

FacebookTweet
Everyone has the right to basic education, but administrative roadblocks are hampering access
OPINION: Reimagining a schooling culture of care
Scroll