It’s time to raise the alarm! 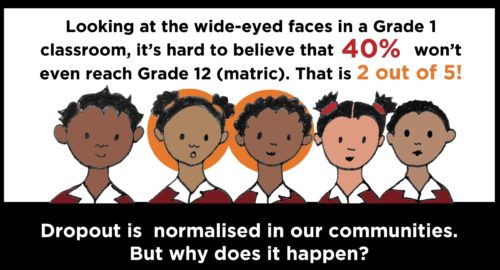 Despite our success in enrolling children in primary school, we struggle to keep them in school until matric. With so much attention on annual matric pass rates, this major failure of our education system is often hidden. And although we may not recognise it, school dropout affects us all.

Dropout is a process of disengagement

The word “dropout” often calls up images of lazy, irresponsible teens, who aren’t in school because of their own poor choices. But this is often not the case. Despite what people might think, youth who drop out of school have often been very committed to their schooling but end up leaving the school system after years of struggle.

Responding to the drivers of dropout

To effectively respond to dropout, we must understand both the factors that push young people out of school and the factors pulling them away. Falling behind in school is one of the strongest predictors of dropout: learners who repeat grades are much more likely to drop out. It’s important to keep learners on track throughout their school careers, and to start strong in the first few years.

The role of a caring adult

Caregivers can support their children by interacting regularly and positively with their school and its teachers. They should also feel empowered to confront the challenges their children are facing at school, advocating for learners to be supported and protected.

FacebookTweet
How can we support our teachers to prevent dropout? Here’s what we’ve learnt.
OPEN LETTER: Civil society calls on Department of Basic Education (DBE) to coordinate an urgent and sustained dropout prevention plan
Scroll